Variations of the 10 Ruble Dashnak Overprint

For those who are interested, there is much more to discover than what the catalogs suggest. This is especially true for the 10 ruble HH overprint. Not only is there a second type – which is described by Tchilinghirian and Ceresas, but not listed in the catalogs – but also several specialties like two stages overprints exist.

Most know the “common” 10 ruble overprint which was used primarily on the 25, 35 and 70 kopek perforated stamps.

Later, due to the increased need of 10 ruble stamps, different basic stamps (rare!) and stamps with existing HP overprint (framed and unframed Z) were used. 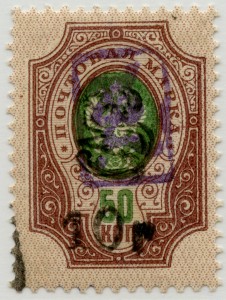 Not so well known is the second type of the 10 ruble HH overprint. This scarcer overprint type was discovered and described years after its use. The stamp was supposedly produced to meet the sudden need of much more 10 rubles stamps when inflation, due to war with Turkey (they were aggressively invading) and Bolshevist activities, rised much faster than in the neighboring countries Gerogia and Azerbaidhan. The inland letter rate increased from 5 to 10 rubles. 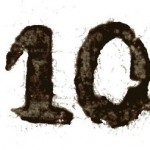 The left side of the foot of the “1” is missing its end and there is a distinctive gap in the right side of the “0” that is present on all imprints – sometimes not so easy to spot when overinked. The gap developed probably because of a bubble of air during casting time. Its existence helps a lot separating this overprint from Type 1 overprints were the “r” did not print or is very weak due to tilting the cancel or weak inking.

Good news: Forgeries of this type are very rare – to this day, since this type was unknown for years and the early forgers missed it thus.

Ceresa lists a pure “10” only overprint on 10 ruble stamps. I have so far not seen this stamp or even a picture of one. Which does not necessarily means that it doesn’t exist.

Like with the Type 1 overprint existing stamps with HP (framed or unframed Z) were additionally overprinted with the new value. One could guess that this was, what they had in mind when producing a “value only” cancel. 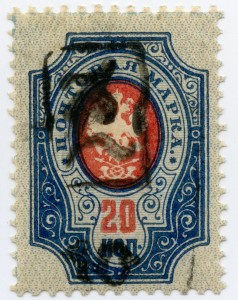 The two stages overprint! This is the real reason for this post. One unlucky clerk got a quite intricate task. A fresh stamp got a monogram from one of the existing cancels, but the value was not allowed to print. He had to tilt the cancel or use extra paper to prevent the numerals from printing. For reasons unknown today they refrained from damaging the existing stamps. After this the 1o rubles Type 2 overprint was applied. This way overprints were created, that show the upper part (monogram) of another ruble type (for instance the smaller type of the 5 ruble cancels) while at the bottom a 10 was displayed.
As you can see, we have quite clear impressions which show how accurately this was executed. Also new ink in good quality was used. 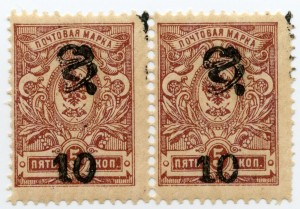 For further study I suggest reading the books form Tchilinghirian and Ceresa.

4 Responses to Variations of the 10 Ruble Dashnak Overprint

This site uses Akismet to reduce spam. Learn how your comment data is processed.